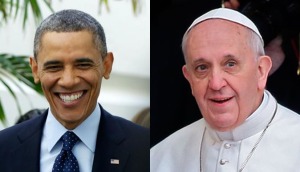 The Pope and the President each will have visited inmates, in two different countries within a week, and the world press is watching; this is very good. Ignorance is not bliss; in fact it can be very expensive. So when world class leaders start wandering around prisons, questions get asked, credible answers are expected, people start squirming under the spotlight; this also is very good.

One could ask why they are there in the first place. The Bolivian prison Pope Francis visited was designed for 800 inmates and houses 5,000 souls. It is the most dangerous of 32 prisons in that impoverished nation. Barack Obama is scheduled to visit the El Reno Federal Correction Institution in Oklahoma, a medium security prison with an adjacent minimum security camp, holding approximately 1,300 male inmates. A sitting US president rarely visits a federal prison, it’s about time. I hope blunt questions are asked to prison officials, who for a change, will be outranked, accountable and perhaps intimidated on their own turf; staff and inmate concerns will be heard, amidst a broken Federal system.

I hope some prison sentences are commuted by Obama, US sentencing guidelines are modified, old school wardens are forced to retire and serious money is allocated to inmate re-entry programs. Putting aside all the presidential candidates who will say anything for votes, Super PAC support and press coverage; serious attention is now focused on prison reform, inmate conditions and the cost of this nation’s mass incarceration binge. That is really encouraging.

No loud mouthed politician or demeaning prison guard can trump hope, faith and an informed public. Judicial reform is coming, slowly but surely. Those who oppose it will be on the wrong side of history. Ironically, it will be their turn to be judged by their record.

I am glad increasing attention is focused on those behind the wire. Why? Because when you have a family member doing time, you do time; it’s very simple. I’m tired of rhetoric and political arrogance. Is this new attention on prisons and their inmates a fad or the real deal? Only time will tell.